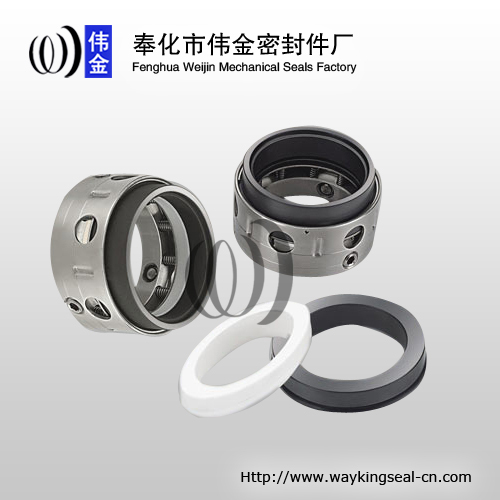 Mechanical seal developed rapidly in recent years, according to different situation of the various structures, but no matter what kind of structure by the following four components:
The first part is a ring composed of Ha Tinh ring sealing face, sometimes called Friction.
The second part is a flexible component parts for the major component of the buffer compensation, the role is to tightly seal faces.
The third part is a supporting ring, which ring and static ring seals.
The fourth part is to ring with the axis of the transmission mechanism.
Mechanical seal is a rotary Pump Seal device. Such as pumps, centrifuges, reactors and compressors and other equipment. As the shaft through the inside and outside the device, so that axis and a circular space between equipment, equipment in the medium leaking out through the gap, the pressure lower than atmospheric pressure if the device, then the air leak within the device, so there must be a device to prevent leakage of the seal. Many different types of seals, Pump Seals have leakage due less to drink and long lifetime, so today's world, mechanical seal is the most important axis in the sealing device. Also known as seal mechanical seal, the national definition of the standards is that: the "by at least one pair of Chuizhi on a rotating axis of the end of fluid pressure and the compensation mechanism in the role of elastic auxiliary sealing the tie affixed He Bing Xia Bao Chi Hua Dong Er Gou Cheng relative device to prevent fluid leakage. "
Sealing fluid leaks in the seal faces and the area between the centrifugal force in the opposite direction and the Pump Seall mechanical seal is called flow; seal fluid leakage between the seal faces with the centrifugal force in the same direction as the outflow mechanical seal. In general, multi-flow type Pump Seal in contents in more than suits the mechanical seal mechanical seal is the outflow. As the outflow direction and the centrifugal force in the same direction leak, so the outflow of a large amount of Split Seal leakage. Therefore, most used petrochemical process pump mechanical seal within the flow, pressure and temperature not only in the corrosive medium high until the outflow of mechanical seals used.
Installation position by static ring can be divided into interior and exterior-type mechanical seal. Static seal ring mounted on the inside of the mechanical seal gland called the built-in Pump Seals. On the contrary, in the installation of static sealing gland's outer ring called the externally mounted machine mechanical seal. Built-in mechanical seal for high temperature and pressure, and the medium on the ring and elastic components of the corrosion conditions are not high. Externally mounted mechanical seal for low and medium corrosive conditions.
According to the number of spring compensation mechanism can be divided into multiple springs and single-spring mechanical seal. Multiple spring compensation mechanism is called multi-spring mechanical seal seal; compensation agencies, only a spring known as the single spring mechanical seal mechanical seal. Multiple Spring Mechanical Seals, also known as a small spring mechanical seals, axial small size of this structure, the method can be used to change the quantity of springs to change the elastic force, axial force is uniform, for high-speed mechanical seal, should not be used in corrosive media. Single spring mechanical seal, also known as Big Spring mechanical seal, seal structure is relatively simple. Some also use the spring type seal transfer torque. Big spring seal application made more, but not for high-speed.
More than two groups and two groups with the layout of the composition of a single mechanical seal mechanical seal series. This seal means to progressively reduce the pressure of the sealed chamber, the medium is not to leak. Tandem seal generally rarely used, only used in very high pressure.
Compensation mechanism for the bellows, sealing ring and ripple control as a whole, the middle ring without assistance, thereby reducing a leak; while reducing friction compensation mechanism, improving the follow nature; for welded metal bellows seal temperature restrictions are not supporting ring; for PTFE bellows seal can be used in corrosive media. The drawback is that some smaller elastic bellows, just add auxiliary spring.
According to the number and arrangement of seal faces can be divided into single-end, double end and multi-Mechanical Seal. Two seal faces "back to back" or "face to face" arrangement of the seal is called double mechanical seal. For the working media of toxic, explosive, volatile, crystalline, high temperature, low temperature and working medium is a gas, or for high-vacuum sealing, can be double seal. Under normal circumstances sealing liquid using clean and good lubrication medium.


Previous:   How to Replace the Mechanical Next:  Various Types of Mechanical Se